Get me outta here!

Our second part of our tour was the boat ride on the Mekong Delta.  It was crazy to go through the delta with these long stalks of bamboo surrounding you. I couldn’t even imagine how it was back in the Vietnam war. I loved the fact that the woman driving, rowing, sticking (whatever you call it) our boat had no shoes on. She just rowed silently through the stalks. Amazing to experience. 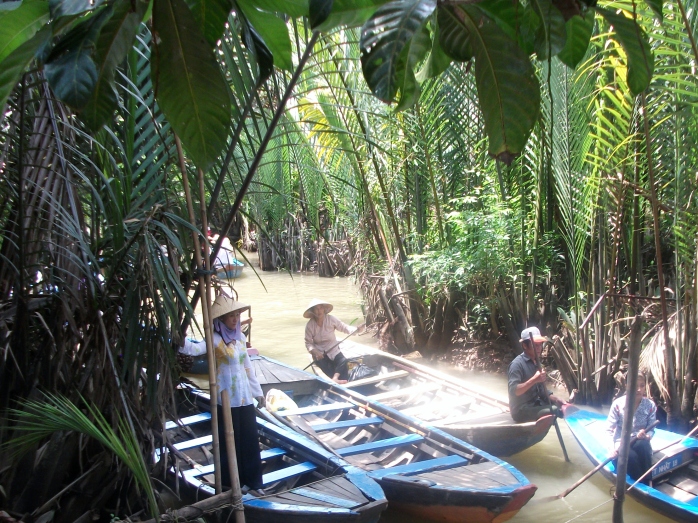 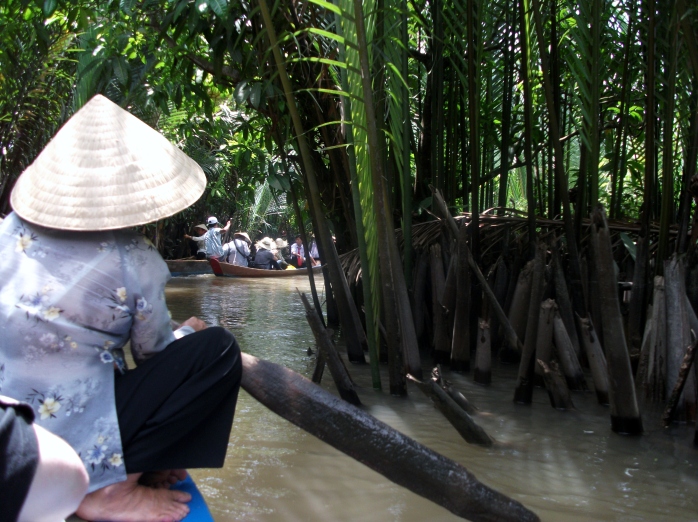 After our boat ride we went to a coconut factory. They showed us how the coconut was ground up and made into candy and other food products including coconut wine. I was waiting for our coconut wine tasting, but that never happened 😦 When they were making the coconut candy there were tons of flies landing on the candy and they would just wrap it up. Kinda gross, but I’m sure I’ve eaten worse before. 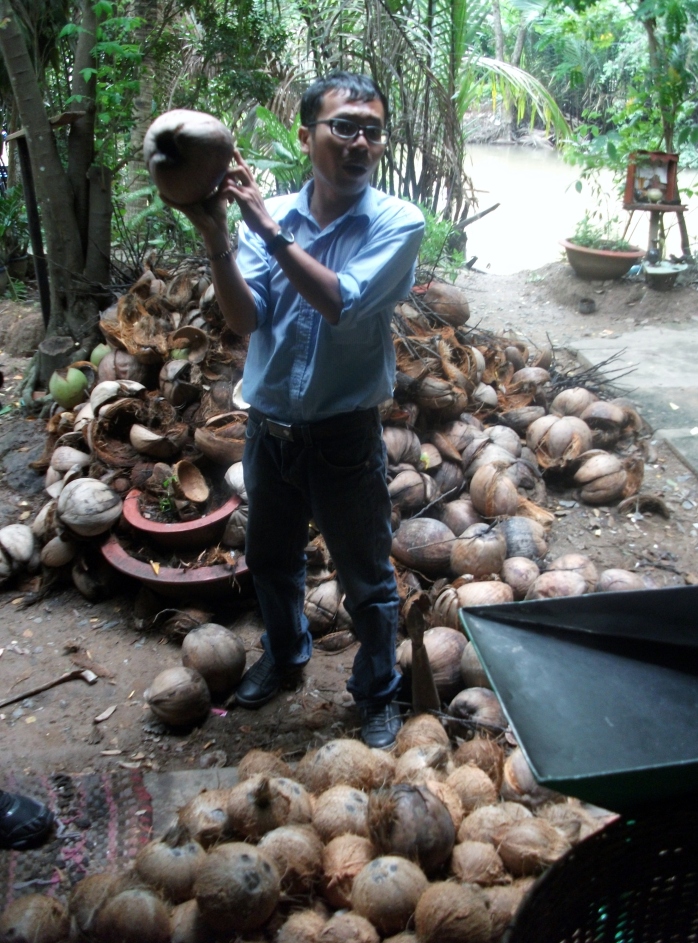 After the coconut factory we took a horse and buggy ride in the pouring rain to lunch that was also on the Mekong. Our tour came with a meal, but if you wanted to you could purchase other fine entrees like snake, rabbit or squirrel. Um no thank you.

After lunch we had the option of taking a bike ride by ourselves in the local village. So we hopped on the rickety bikes and rode off. Of course the hubby tries to pop a wheelie on these old rusted bikes and his chain comes off. He put it back on, but it came off again, and again, and again, until it finally wouldn’t go on anymore. He basically busted the bike and got his hands all greasy from trying to fix it. He had to carry his bike all the way back to the restaurant. My hubby has the worst luck. Ah, but it was pretty hilarious I have to say 🙂

Our bike ride was the end of our tour and then we high tailed it back the 2 1/2 hours back to our hotel after some quick shopping at the port.

On our second day in Vietnam we booked a tour to the Mekong Delta through our hotel. It was in an air-conditioned van and included lunch for about $15 USD. We rode the van for about two 1/2 hours to our destination. We came across the normal sights of Vietnam traffic with tons of motorcycles! Our first stop was at the bee farm and then we were entertained by some local musicians and singers while we enjoyed our fruit.

Dean smiling for once. 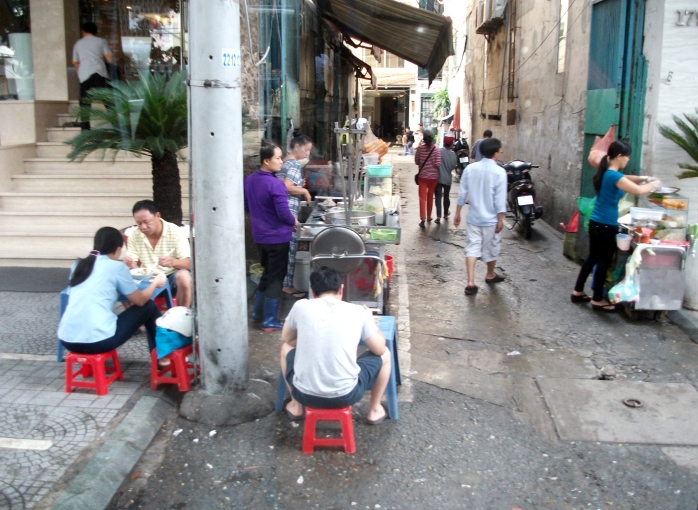 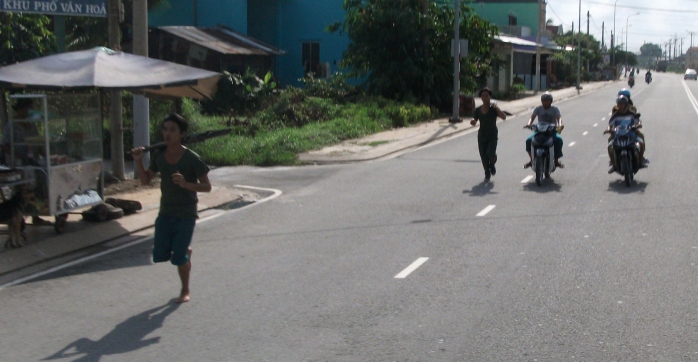 Some trainees I assume running holding guns. I hope they aren’t loaded. 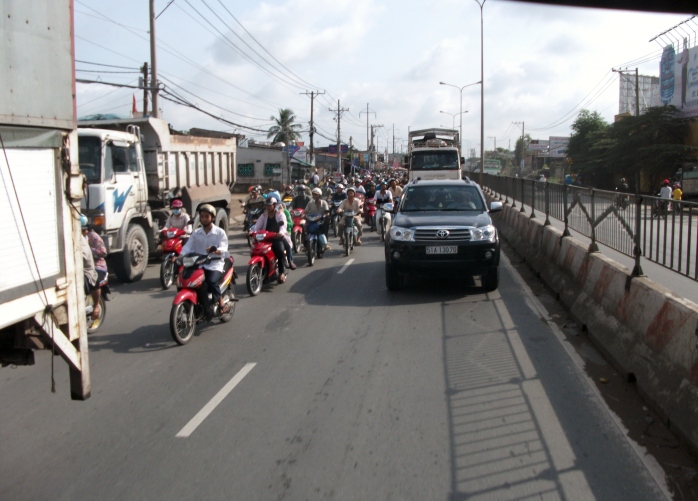 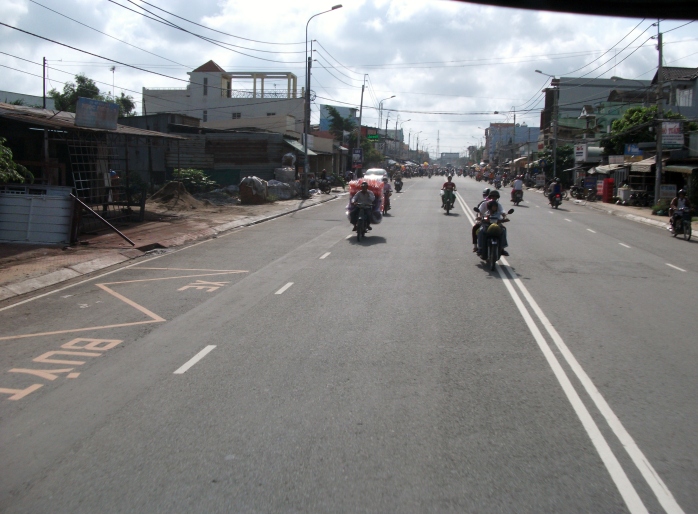 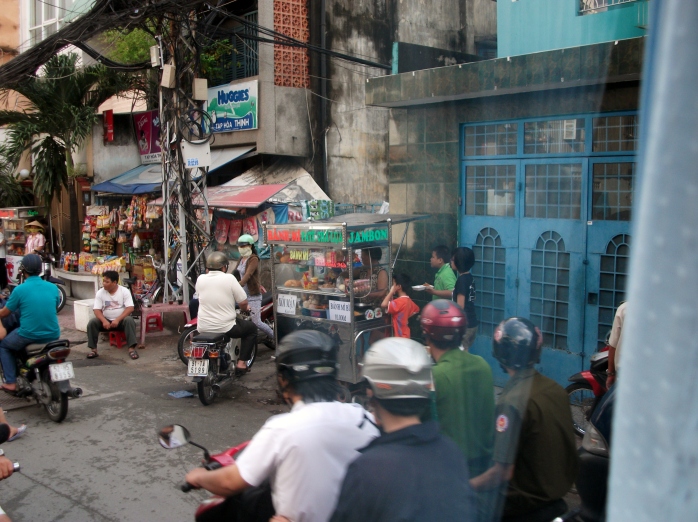 Banh Mi cart. I didn’t eat at this one, but my mouth was watering. 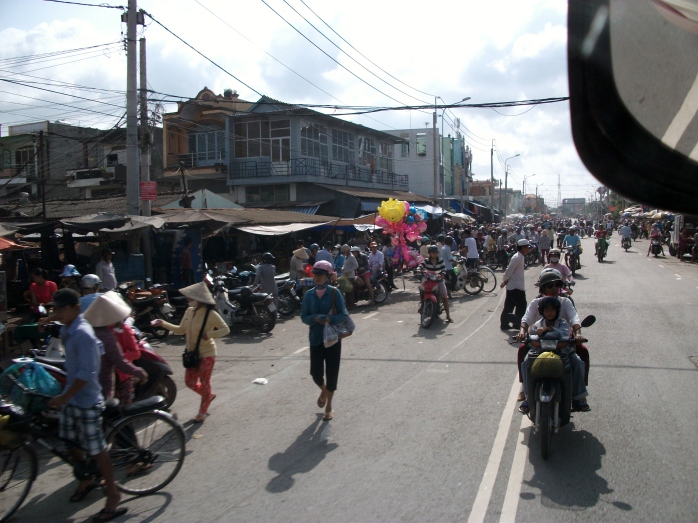 A market on the way to the Mekong 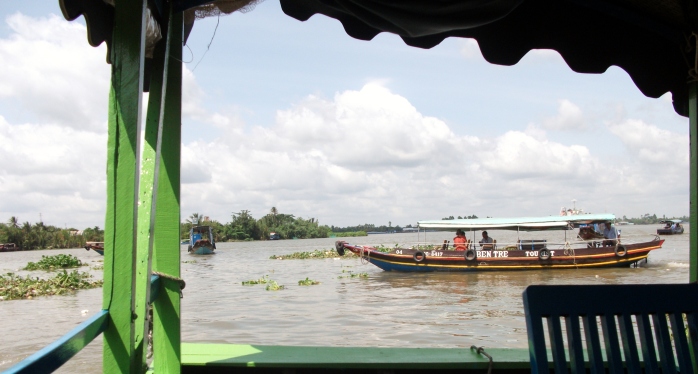 Our boat to the bee farm 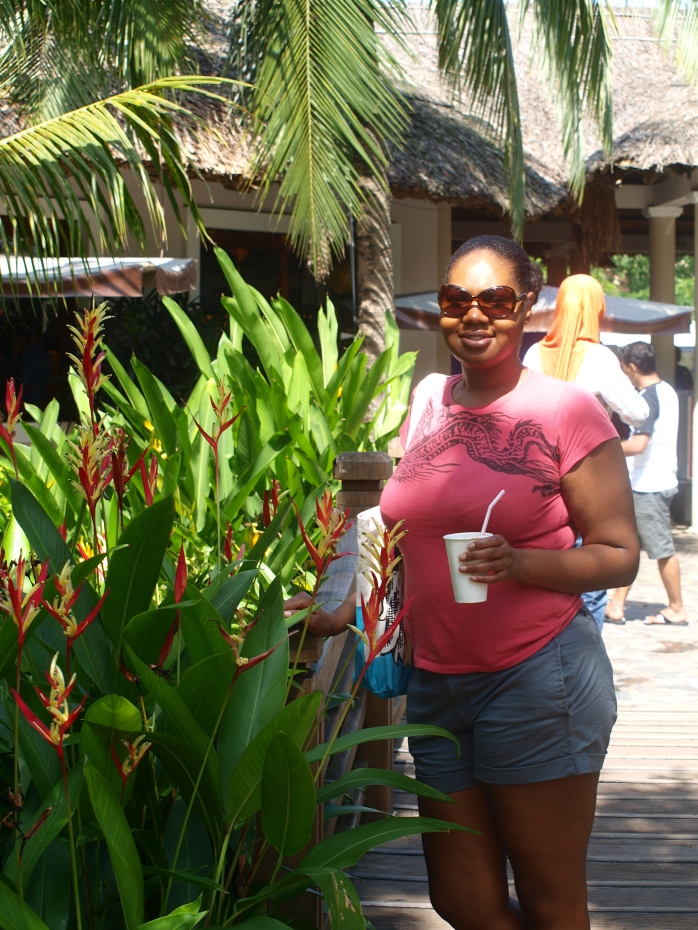 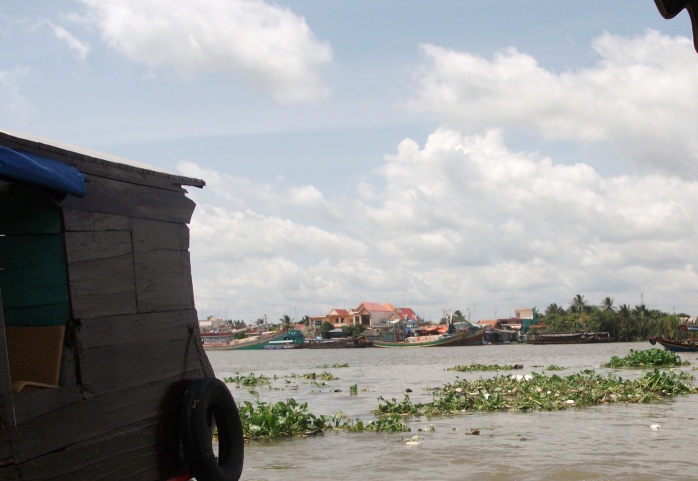 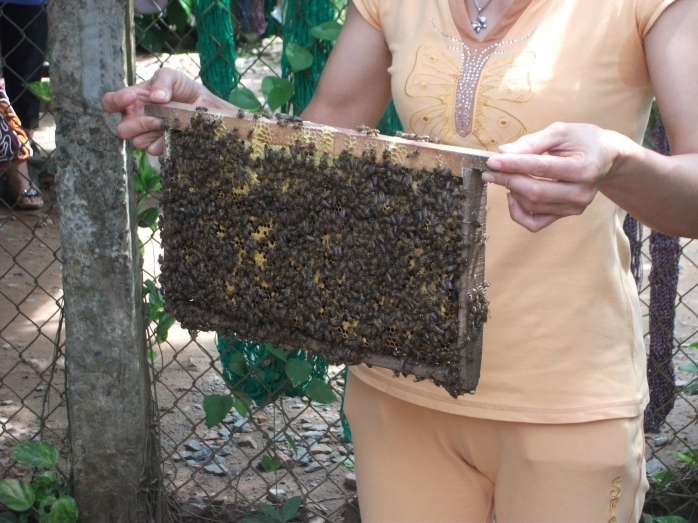 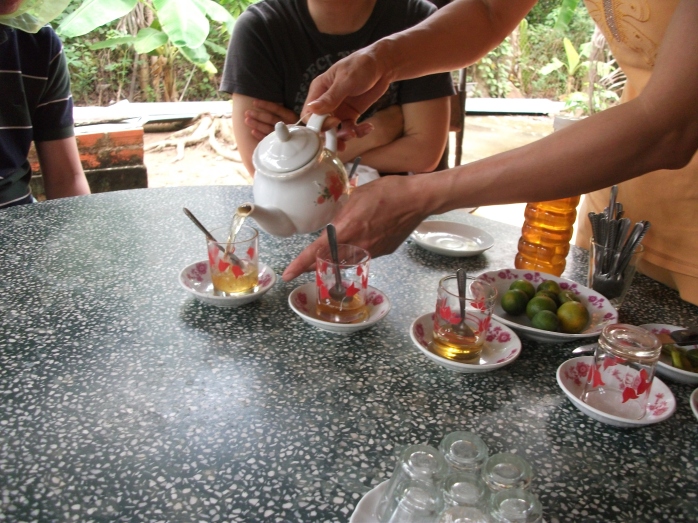 I know I know this part 3 is coming really late after Part 2. I figured I needed to catch up and not try to write such long posts where I write part, save it, then write more. I end up having really long posts that take me forever to post. So decided to make shorter posts for you guys since I can’t type much anyways.

Our first day in Vietnam we walked to the War Remnants Museum (Bảo tàng chứng tích chiến tranh) in District 3. This museum is a must see if you go to Ho Chi Minh. It is focused on the Vietnam War and has great air craft, weapons (there is even a guillotine), pictures and just written history. Of course the history is one-sided and is pretty anti-American, but it was interesting to see it from the Vietnamese perspective. Seeing the effects of the agent orange is just heart wrenching. You will see some people while walking in Vietnam of those affected by agent orange and people who have had limbs blown off by the landmines that are still present in the country. Definitely take a trip there and spend a couple of hours learning about an important part in Vietnam history

*Travel Tip – If you choose to go to the museum make sure you don’t go during lunch time as they close.

When we were in Vietnam we walked everywhere except for when we went on our tour to the Mekong Delta. We stayed in District 1 and used our little black and white map to find the tourist attractions. One of the good things about walking is that you come about things that you might not come across if you were in a car. While walking from the museum we came across a guy carrying this heavy load. He let us see how heavy it is and boy it was freakin’ heavy! My shoulder was killing me the whole day. 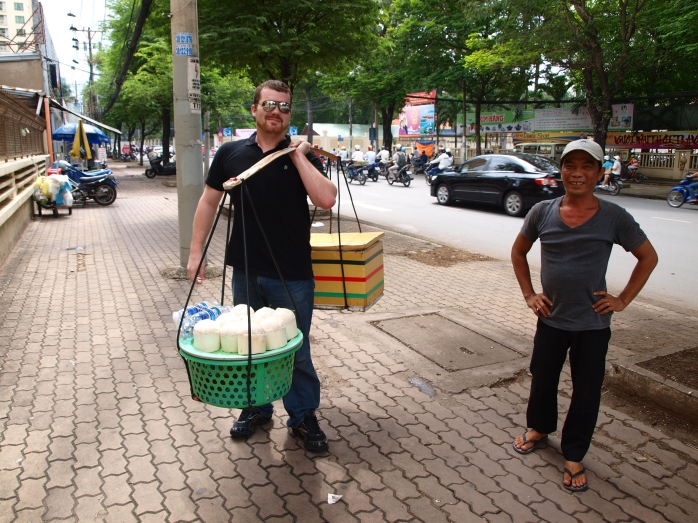 See the little guy on the right? He carries this thing around all day!

We came across this park on our walk. It was nice. Just thought I would post a few pics.

Uploading the Bali Pics as promised taken with my camera that I got from the hubby for Christmas. Had a great time relaxing on the beach, snorkeling, eating good food (except for the sushi I got sick off of), spa treatments and turtle island!

Click on the first pic to see it enlarged then scroll through the photos. Enjoy!

Soaking up the sun on the beach

Our boat ride going from snorkeling to turtle island

Tranquility while you wait for your spa treatment

Oils and other great herbs and spices for the spa treatments

Lap pool at the spa

Where I received my Balinese massage and body scrub

The other side of the spa room

The milk and honey bath after the massage

Sushi I got sick off of

My super yummy lemongrass creme brulee. It was sooo good even if I’m not a big lemongrass fan

At turtle island. I look a mess because this is after snorkeling.

Ana and I at turtle island

They said we can swim with them. No thank you I’ll just stay right here and pet them 🙂

The fruit bat trying to sleep

I have given 2012 a big smack on the lips goodbye and welcomed 2013 with open arms in beautiful Bali. 2012 has been a year for the record books. It started out rocky, had some small pebble slides and is ending smoothly like the sand beneath my feet. As I think back I realize that it seems that every year has its ups and downs. It’s a way of life. We all have happy moments, sad moments, angry moments and ecstatic moments. You name it, we have them. When we’re going through those not so great moments we sometimes think, “why does this have to happen to me?” or “will I ever get a break.” In the end we all have to pick ourselves up and get on with our lives. Look at the positives we have in life and learn from those moments that we usually want to forget. I’m not going to say everything happens for a reason cause sometimes things in life just plain suck and just don’t seem fair, but I will say that whatever happens know that you can get through it. So as you begin this year, some of you with your long list of New Year’s Resolution’s make sure that one of those resolution’s is to get back up no matter what because as much as we would like to think that we are going to have the perfect year ever. It just doesn’t work that way. We’re human. We have crappy things happen to us and sometimes we make mistakes, but we all get up. So for my ONE resolution for 2013 is to always  get back up! Yeah you may think it’s me being negative nelly, but in reality even when things are going great I know it’s because I got back up.

“Happiness is the consequence of personal effort. You fight for it, strive for it, insist upon it, and sometimes even travel around the world looking for it. You have to participate relentlessly in the manifestations of your own blessings. And once you have achieved a state of happiness, you must never become lax about maintaining it. You must make a mighty effort to keep swimming upward into that happiness forever, to stay afloat on top of it.”
― Elizabeth Gilbert, Eat, Pray, Love

Last Day in the PhilippinesApril 7th, 2013
Moving back to the states!